Sorry, the post title just sounds a little gross. But these two things have just been on my mind today: shoes and toenails.

First off, if you are a distance runner and have ever trained for a half or full marathon (or anything longer!), you’ll probably find this article hilarious and completely relatable:
http://www.more.com/health/fitness/yuck-marathon-trainings-10-grossest-things

I can completely relate to numbers 1, 2, 7, and 10. It’s amazing the issues you run into when you go running for longer than 90 minutes. I swear, every time I hit 10ish miles or 90 minutes into a long run, my body starts rebelling. Chaffing will start making it’s presence known; my tummy might start to get upset from having nothing in it but Gu’s; and my sore toe will start reminding me that it’s still there.

About a month after my first 10K is when I started seriously training for my first half-marathon. This is when my first toenail incident occurred, and I ended up losing the nail on my second toe on my right foot. I now know it was because my shoes were too small. Months of running + a missing toenail has made me realize that running shoes should always be bought a 1/2 size larger than your normal size.

I thought I had it all figured out. But then the week after my half marathon, I noticed that the SAME toe (that finally had a thin nail growing back!) was sore and turning purple underneath the nail again! What the crap?! I thought I had done everything right. I had size 7 shoes instead of 6.5. I had on nice wool, sweat-wicking socks. I had my nails trimmed short. But nope….still happened. Again. Great… Now I just have to wait for the sad, thin nail to fall off and grow out. With my luck, it will happen just in time for flip-flop season! 😦

Should I get that for my car along with my 26.2 sticker that I will earn in March? Oh well…toenails are overrated. Guess I’ll just be picking my shoes a little more carefully during the next few months as the temperatures (hopefully!) start rising. I usually like my feet and enjoy wearing sandals/flip flops. But looks like I’ll be singing a different tune this summer!

Soooo, in hopes of preserving all my other toenails through my marathon and the summer months, I know I need another pair of shoes! Right now, I’m relying heavily on 1 pair and using another pair for shorter runs or trips to the gym. I love my first pair of good running shoes, Brooks Ravenna 4s, but I bought them in my normal shoe size instead of a bit larger, so I can’t use them for my long runs or race. This is why new shoes are necessary. 🙂

The Saucony Cohesion 6 and I really like them. I want something similar but with just a little more support in the heel. My Brooks are nice and thick in the heel, and I love them for it! The hunt is on…and I’ve found that it’s a pretty good time to do shoe shopping in the running world. Companies release their new shoes at the beginning of the year, so the older (last season) shoes go on sale. Woot! I need to find something quick and get them broken in before Little Rock. I’m sorry, credit card, but it’s for the good of everyone. Nice, new shoes will keep my feet happy and will keep everyone else from having to see all my toenail-less toes this summer. 🙂

Other than pondering new shoes and toenail issues, my day has been fairly normal. It kept snowing overnight, so my morning run and commute to work were interesting. My run was slippery and cold. It was still coming down at 5 a.m., so it was like running in a dark snowglobe. I also had one guy driving a large truck stop and yell at me as I was running on the opposite side of the road from him: “Hey dumba**, you shouldn’t be wearing all black!” I proceeded to keep on running in the opposite direction as I flipped him the bird. I had on a neon long sleeve top, neon shoes, and a neon ear warmer with my black (and reflective!) puffer vest on top. And I was nowhere in your way. Sorry for wearing ‘all black’, but I can’t help it that you are obviously an idiot who just so happens to be colorblind as well. 😉  People like that need to spend just ONE day in the shoes of a runner. I doubt he could keep up with me for even 5 minutes! (and yes, I am still angry about the dumba** comment, can you tell?!)

Tonight Nick and I will be home together, so we may venture out to the gym for a bit. I only got in 6.2 miles this morning, so a couple more treadmill miles won’t hurt. Plus I love people watching at the gym in the evenings. There are some crazy characters that show up for some of the evening classes!

Hope you all have a great night, and let’s keep our fingers crossed for no more snow!

Happy Tuesday to ya! It’s been a beautiful day so far here in  417-land. (Springfield’s area code for those not from the Ozarks!) I’ve been busily working all morning and thoroughly enjoying seeing the awesome 70-degree weather out my window. Plus, being busy makes the time past faster. Woohoo it’s already lunch time! But let’s back up to last night.

My dinner last night was not for the weak of stomach. I crave the weirdest things after working out. And yesterday at 8 PM when I got home from my 3rd Jazzercise class of the day, I was ready for some randomness for dinner…

I quickly ate some yogurt before hopping in the shower. I had some vanilla Greek yogurt, and obviously inhaled it too fast to even snap a photo…oops. Post shower, I reheated some corn/pepper mix from Sunday night’s dinner to get some veggies in my belly.

This corn was a Green Giant Steamer mix, and OMG it is amazing. I never splurge on the steamer bags of veggies, but I had a coupon to use over the weekend. I will definitely be purchasing again! It had a light sauce on it that was a little sweet and spicy.

Once I downed the veggies, it was onto some more substantial protein. Here’s where the weirdness happened. 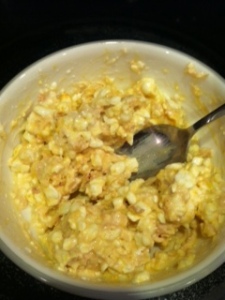 For this appetizing mix, I added 1/2 cup low fat cottage cheese, 1 single serve packet of tuna, and some sweet & spicy mustard. It was amazing basically to my grumbly tummy. I ate half of it in a low-carb tortilla, and the other half I just ate straight out the bowl. Nick said it looked sick; I think it was awesome. But hey, I’m easy to please after 3 hours of cardio!

After dinner, I basically fell asleep by around 9:30 because my body was so exhausted. But I slept hard and woke up bright and early and ready to run! The weather was cool and it had just stopped raining as I headed out the door. I started off pretty slow but I felt amazing, like I could run for hours and hours. By the time I hit mile 2, I was not feeling so hot. The last 3 miles were a struggle. I guess some runs will just be easier than others! I made it to 5.4 miles in around 48 minutes before I headed home to shower and get ready for my day. Not my best time, but it’s better than no run at all.

My 10K countdown is at 18 days, so even these not-so-thrilling runs are at least keeping me on track to do well on race day. I’m already getting excited to see how well I can do the morning of the Sunshine Run!

Breakfast was quickly thrown into my purse like every other morning as I rushed out the door for work.

Lotsa coffee, oats, and protein. YUM. And don’t forget all my vitamins in the tiny orange Tupperware container in the background. I always choke those down after my food has been inhaled. I also had a banana mid-morning to stave off some lingering hunger pains. I swear I eat more now after I’ve started running regularly than ever before! I can only imagine the meals that marathon runners eat. 🙂

And speaking of hardcore runners, I have officially declared myself a ‘real’ runner since I’ve been training for my 10K. And real runners need real running shoes. I’m currently running in some older Rykas that I bought for Jazzercise but decided I didn’t like to teach in them very much. Probably because they are actually made for running and not aerobic exercise.

This morning after my run, I noticed my feet were extra tired and my toenails were getting sore. TMI, maybe, but it really made me realize that I needed to invest in some good shoes. I immediately started researching and ordered these babies this morning…

They are the Brooks Ravenna 4. I’ve never even heard of Brooks before but they had great reviews! I ordered through Zappos so I can return for free if I don’t like them. I can’t wait to try them out asap! Any Brooks fans out there?? This is all new to me, so the learning process regarding running has definitely begun. I’ll keep you updated when the arrive! I hope I love them so I can have them nice and broken in for the 10. Fingers crossed!

Have a great Tuesday, everyone. I’ll catch ya this evening!