Hey there! How’s your Monday going? Mine has been a good one!

I started the morning with my Monday AM Jazzercise class. SIX people showed up. That’s right. 6. I couldn’t believe it. I’m usually lucky to have 1 or 2, so this girl was definitely shocked! It was a fun class even though I’m pretty sure all the students were sleep-walking through most of it. 🙂

Once I got cleaned up and to the office to start the day, I was hungry and ready for food! I was rather excited for my morning meal. I found some seasonal flavors of Clif Bars while grocery shopping yesterday, and I couldn’t wait to try them out! 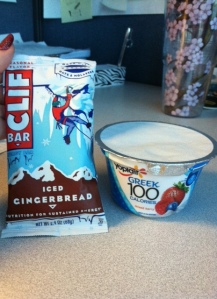 This Iced Gingerbread Clif Bar was extra gingery and festive. I loved it!

I also bought a Pumpkin Pie Spice Clif bar that may be a good breakfast for tomorrow. I’m such a sucker for the holiday flavors! I’m a food marketers dream during the holiday months, and I’m not ashamed to admit it. 🙂

Saturday night was a fun one. Nick and I were invited to my friend Carley’s Annual Ugly Christmas Sweater Party!

We wore matching sweater vests! Mine is compliments of my mother. She loves her festive sweaters and is kind enough to let me borrow one for this party each year. We were the matchy-ist couple there!

The night went on with lots of eating of homemade goodies and games around the house. Jenga was our main event. 🙂

Our game got pretty intense, and this happened shortly after I took this photo…

I learned that Jenga really stresses me out towards the end of the game!

I munched on veggies and dip along with some cookies and other goodies. Carley goes all out with her hosting, so I love going to her parties! 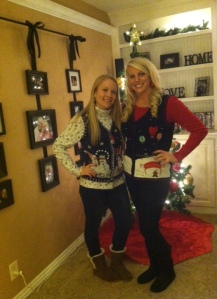 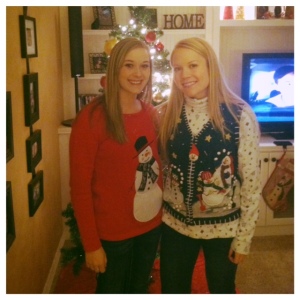 Such a cutie! So this night turned into more than just a party – it was really more of a small reunion of friends that haven’t had time to see each other lately. But it worked out great. I chatted with the gals while Nick bonded with the other boyfriends outside. 🙂

It was a great night and put me into the holiday spirit for sure. I hope you have some fun events to attend during the next 2 weeks. We can only indulge ‘guilt-free’ for another week or so. So get together with your friends and family and have some fun!

And happy holidays from the sweater vest couple. 🙂

Have a great evening!!

Happy Monday everyone! I hope you had a great weekend and are feeling refreshed as we start this new week.

My weekend was a complete whirlwind, but I loved every second of it. So let’s back up to where it all started on Friday evening!

Each year during the month of October, the local Breast Cancer Foundation of the Ozarks (BCFO) hosts a big fancy event called Hooked on Dance. It’s an evening of dinner and dancing where they auction of lots of big ticket items and trips to raise money for the upcoming year. The tickets are really expensive as it is meant to raise lots of money for the foundation. This being said, it’s something that Nick and I would typically not even hear about, let alone attend. But my company decided to sponsor 3 tables and raffle off the seats to employees! I was lucky enough to snatch up 2 seats, and Nick and I jumped at the opportunity to attend a fancy event for free!

Right after work on Friday night we both rushed home and put on our dancing shoes before heading to the event. The theme was Havana Nights (think Cuban night club, circa 1950’s). I had absolutely nothing in my closet that actually fit this theme, so I reused the bridesmaid dress from Katie’s wedding!

I was very excited to be able to rewear it, especially within only one week of the wedding I had it for!

As soon as we arrived to the University Plaza Convention Center, I started hunting for my girlfriend Carley. She works for the BCFO part time, and I knew she would be working the event that night!

In that hot pink dress she was hard to miss! She was busy all evening handing out wine and helping with odds and ends, but we got to chat quite a bit. It was good to see a familiar face!

The evening started with some cheese and crackers appetizers, along with some wine that was provided at each table.

I couldn’t have much cheese, but they had a huge assortment of different crackers, fruits, and veggies that I devoured. I was hungry!

Then it was onto the main meal which was served buffet style. Going into the buffet line, I knew I would probably eat every bite of my dessert, so I chose to stay away from the dinner rolls and potatoes and splurge more on veggies and protein. So I started with a small dinner salad with Italian dressing.

And then it was onto some green beans, fish, chicken, and pork!

Yes, I had to try each type of meat they had. It all looked so good!

Nick was very enthused with his meal. He’s a ‘meat and potato’ kind of guy, so he was happy with the buffet selection.

Then it was onto my favorite course: dessert! 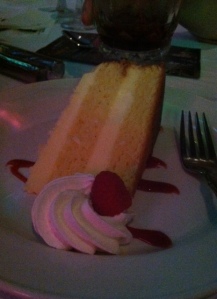 This cake had an orangey hint that made it delicious! It was moist and the icing was light and fluffy between each layer. And yes, I ate every last bite. 🙂

The night continued on with the live auction of various things: trips to Mexico, fresh meat, antique items…to name a few. We didn’t bid on anything since most items started at $500 and went all the way up to $15,000!

Carley and I ran into another Kappa Delta sorority sister, Michelle, and had to snap a photo.

It was such a fun night! We ended the evening with munching around on leftovers and dancing for a bit before heading home.

We were home around 10:30 pm, and I headed straight to bed since the next morning’s wake up call would be at 6:30 am to head out for Kansas City! But more on that later. 🙂