Hey there! Hope you’re having a wonderful & relaxing Sunday! We’ve had a great weekend despite the sun refusing to shine. I’ve spent most of my time running, teaching Jazzercise, eating, and napping – some of my favorite things!

Yesterday started bright and early with my second (and final!) 20-miler before the Little Rock marathon. The sidewalks were non-existent and the roads were still pretty icy and slick, so it was a bit of a stressful run. The winter has made me really dislike running on the roads with cranky drivers everywhere. I cannot wait for spring and clear sidewalks and trails!

This run went a lot better than last week’s 20 mile run, and that makes me hopeful that my endurance is improving and my body is ready for the 26.2. I had to take a potty break at mile 11 and this was my only real stop. I’m hoping this pit stop was brought on by the mid-teen temps and that I won’t have to be using any porta potties along the race course!

After this run, a bagel with jelly for a snack, and a hot shower, I had to meet the Jazzercise ladies for a meeting at London Calling. A lunch meeting here after one of my long runs was probably one of the best ideas ever!

We all placed our orders before we sat down for our business meeting on the double decker bus. I ordered the traditional pasty because it was dairy-free. But I was happy to find that it was delicious and decadent!!

It was buttery and stuffed full of beef, potatoes, and onions. Yum!!

I ate this pasty in about 2 minutes flat and dipped my leftover ‘crimp’ in some grape jelly. My post-run belly was SO happy! And I even took one home for Nick after our meeting because I’m the sweetest girlfriend ever. He loved it too. 😉

And now for Donuts!! 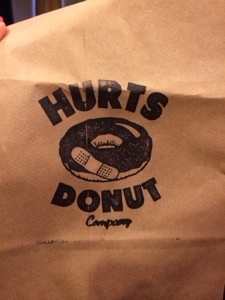 I don’t know what it is, but I have been craving donuts ever since last night. After dinner I wanted a donut so bad, but the roads were getting icy and we didn’t want to spend anymore time out before heading home. I had an apple to satisfy my sweet tooth, but it didn’t work too well. I went to bed still thinking about donuts and even woke up this morning still craving donuts!!

On a side note, donuts are awesome but really aren’t my favorite sweet treat. I would rather have a giant cupcake or a hot chocolate chip cookie. So when I was craving them still this morning, I knew it was one of those cravings I would have to satisfy ASAP!

Hurts Donuts was the only donut shop open this afternoon, so Nick and I headed downtown to try out Springfield’s newest donut shop. 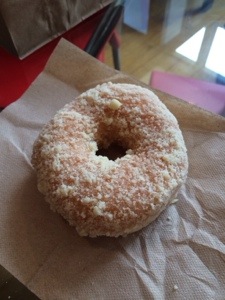 I had this fluffy streusel donut because it was hot when we got there. 🙂 I’m a sucker for hot donuts! And Nick had the plain glazed donut. I also got a special Reese’s peanut butter cup donut to bring home for later.

Both of them were amazing and disappeared in 30 seconds flat! 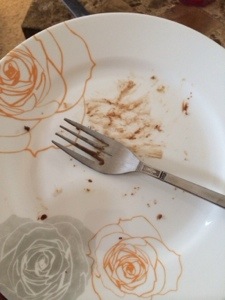 Yum yum yum!! Mac was sad that mommy brought home a chocolate donut that he couldn’t have.

He was so cute that I’ll have to remember to being him a bite of a plain glazed donut next time!

Hurts was a really cute little shop with a great variety of donuts. They had one covered in Oreos and another covered in Cinnamon Toast Crunch cereal. This place might convert me into a donut-loving fool! No they aren’t healthy, but a donut a month won’t hurt anything. 🙂 If you’re in downtown Springfield soon, you should stop by for dessert. They are open 24 hours!

Tonight we are just relaxing and finishing up some things around the house. I have some of my famous chili in the Crockpot that we’ll be digging into soon. I can’t wait! Have a good night and I will see you all tomorrow!!