Sunday morning in STL was wonderful for several reasons.

Everyone was kinda sleeping in and moving slow on Sunday morning, so I had one large mug of coffee before heading out on another run on the Maramec Bottom Trail.

It was way too pretty for me not to stop quickly and snap a few pics. Plus breathing breaks are always good. 🙂 Especially when your struggling to breathe in the cold air.

It was pretty darn cold outside yesterday morning, but I stayed fairly warm in my long sleeves and ear warmer. Next item to purchase for my winter running: thermal gloves that I can use with my iPhone. My fingers were about frozen on the shady parts of the path. But it was almost too pretty for me to care.

The path runs along the Maramec river, and the views were extra beautiful during the quiet morning. I made it to 8 miles in a little over an hour with a slightly slower pace than my Saturday run.

I headed back to Nick’s parents house sweaty, tired, and almost frozen. I didn’t realize how cold I was until I had a hot cup of coffee in my hands. I had a quick cup of Chobani Greek yogurt before I took a long, hot shower to warm up.

The rest of the morning was spent shopping with Karen, Nick’s momma. She is an awesome bargain hunter, so I love going on shopping trips with her. We went to Ulta to spend the gift card she gave me for my birthday, and then went into Target where I spent wayyyy to much money. What is it about Target that makes women spend 3x the money they intended on spending?! Anyways, I was excited to find a few Christmas presents, some running gear, and some seasonal coffee!

I already tried this Caramel Apple coffee this morning, and it is absolutely amazing. Not too appley, and it was even good with my pumpkin spice creamer. I think I’ll have it again in the morning!

He is so scary. The large hat and tiny arms on this costume sold me. I couldn’t stop laughing at it in the store, so I knew I had to bring it home.

Doesn’t he look happy?? Well maybe it’ll make him happier to wear it Thursday night while the trick-or-treaters come around. It will at least get him some good attention!

After we made it home from shopping (and Mac tried on his costumer), we had a quick lunch and packed up the car to head home. I drove so Nick would hold Mac and relax on the drive back, so most of the trip went like this. 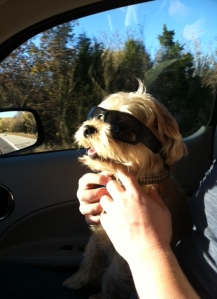 Mac is a cool dude. Or at least he thinks so.

All-in-all it was an awesome weekend, and I can’t wait for Thanksgiving so we can go back to visit again!

Have a great Monday night, everyone. I’ll see you all tomorrow! I’m debating getting up early for a little run. We’ll see what my body decides to do in the morning. :)Nighty night!